Get a Free Writer's Guide 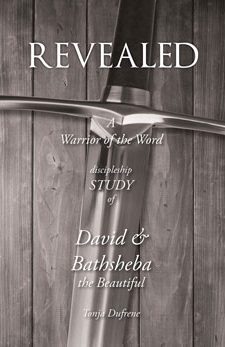 Revealed: A Warrior of the Word Discipleship Study of David & Bathsheba the Beautiful

Revealed is the study of David & Bathsheba, a story in which the gross overreach of power left in its wake a plethora of wounded and discarded souls. Bathsheba was merely one among many who suffered as the result of unjust decisions made by the most powerful man of her time, King David.

Much is revealed about his heart as he commands a military campaign against the enemies of his kingdom while struggling with an assault against his own soul. Much is revealed about her heart when her life journey leads her through the horrifying experience of being power raped, being involuntarily removed from her home only to be added as one among many in an ever–growing harem, and the eventual loss of her infant baby. Through all of their experiences, David revealed a repentant heart while Bathsheba determined to learn from it all. As a result, she eventually nurtured the wisest king that ever lived, King Solomon.

How did they do it? Where did they find the strength and determination to continue living in the aftermath of such painfully public and personal losses? And more importantly, where might we find the same as we experience life's trials? Let us observe them in the depths of our imagination and study David & Bathsheba's lives together in… Revealed.